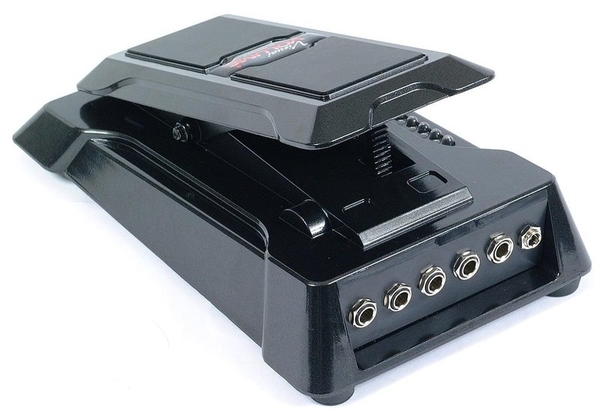 Back by popular demand!

The new Visual Volume 10th Anniversary Edition is the finest, most exciting and useful volume pedal ever created. Don''t just try to find the right volume by ear, see it with the 0-10 LED readout! The Visual Volume''s all-new design features die-cast aluminum housing, and blue and red LEDs, Active and Passive modes and clean boost pre-amp in active mode...this one goes to "11"! The Visual Volume also has two inputs and outputs for mono or stereo use and a Tuner Out jack for silent tuning! Works great on bass OR guitar!

Developed in the 1940''s, the volume pedal was one of the earliest effect pedals ever produced. Some of the earliest users of it included the members of Bob Will''s Texas Playboys. Those hillbilly jazz cats had to be ready to solo whenever their cigar chomping, fiddle-playing bandleader would point his bow their way. Later, steel guitarists would begin to not only use it to facilitate volume changes like those Playboys, but also to make a smooth swelling effect. Two decades later, legendary guitarist Larry Carlton would use that same swelling effect with his electric guitar on hits by The Crusaders, Joni Mitchell, Steely Dan, and many others. The volume pedal was soon the indispensable tool for the session musician worldwide. Today, it''s hard not to find one on the pedal boards of the top musicians in any style of music. With its great popularity though, it''s interesting to point out that the design of current volume pedals has only subtly changed since the first ones saw the light of day over 60 years ago. This leads one also to ask the question, "Why are we still using clunky cast metal housings with a potentiometer and a piece string attached to it?"

Visual Sound''s Bob Weil looked at the volume pedal and wondered this very same thing, but unlike others, he did something about it. Originally introduced in1995, the Visual Volume quickly became the choice of numerous pros including Victor Wooten and Prince among others, but production was halted in 1998 while other pedal designs were introduced. After the great success of the Jekyll and Hyde, H2O, and Route 66 pedals, Weil felt it was the right time to re-introduce this revolutionary pedal.

The Visual Volume features discreet stereo ins and outs, and a tuner out for silent tuning. But surely the first thing to catch one''s eye is its vertical row of 10 LED''s. As one gasses the pedal, the LED''s light, giving one a visual indication of where one''s gain level is. Brilliant! Musicians everywhere now can simply look down to see where their volume level is.

Those stereo ins and outs also mean you can use the pedal with 2 separate instruments, into 2 independent devices. Of course you can also plug into only 1 of the inputs and use it to split one''s signal to 2 amplifiers, or channels of a DI… or just use it mono. The Visual Volume operates on a 9-volt battery or a 9-volt adaptor such as the Visual Sound 1 SPOT. The pedal is also operational without battery or adaptor in passive mode.

One of the many shortcomings of the traditional pot and string volume pedals has been the signal loss, especially in the area of treble frequencies. Visual Sound addressed this all important issue by including a discreet buffer circuit into the pedal. Viola, the problem of signal loss has been solved. Going a step beyond that, located in the pedal are 2 trim-pots that allow the user to adjust the amount of boost available. The factory setting is to unity gain, but one can adjust the trim-pots to allow for a whopping 5 times that of unity gain! With a high gain setting on the pedal, it''s possible to use the Visual Volume as a high quality boost pedal. Unlike the current crop of booster pedals made from mail-order project boxes, the Visual Volume can be a high-quality booster that is variable in real time, yet can always go to zero volume as well. To further give the user options, either channel of the volume pedal''s buffer can be defeated for true passive operation if no power supply is available or when using it as an expression pedal.

Many a touring musician has stepped on their volume pedal to find it flopping around with a loose piece of string hanging inside it. Even more common, they have stepped on their volume pedal to find it extremely noisy, and/or non-responsive all together. Many have tried to re-attach the string, and/or replace the worn out pot, only to find themselves running to the closest music retailer to buy a replacement pedal. These pedals are only repairable by the most-savvy of techs, with much muttering and swearing in the process.

To take on these deficiencies head-on, the Visual Volume has a sturdy rack and pinion pot actuator system, and it is attached with a standard CAT-5 cable. If your pot goes out, a replacement can be mailed for a nominal fee from the manufacturer. No tech needed to replace it either, just loosen the single Phillips screw and hex nut, and the pot is easily removed. No soldering is involved either, simply detach, and re-attach the CAT-5 cable to the replacement pot. The only task left is simply to re-calibrate the pot so one gets the advantage of the full range of the pedal.

Whenever revolutionary products come out, those that embrace it are the vanguard. Just a few of the more famous players using the cutting-edge Visual Volume pedal include sessioneers Brent Mason and Dan Dugmore . Turn on your TV, and you can see Late Night guitarist Jimmy Vivino using his, and at a arena near you, check out Chris Rodriguez with his Visual Volume as he backs Keith Urban.

Back by popular demand

Two inputs and outputs for mono or stereo use

Tuner Out jack for silent tuning